Swindon has just welcomed GoodTalent Corporation into its ever-growing tech startup community. Founded a year ago in Nigeria, GoodTalent wanted to move to the UK to expand their innovative HR and recruitment business internationally. We caught up with founder Jimmy Braimah about the future GoodTalent and why he chose Swindon as his next home.

Jimmy had worked in recruitment consulting for 15 years in both the UK and Nigeria, where he started his own firm in 2012. 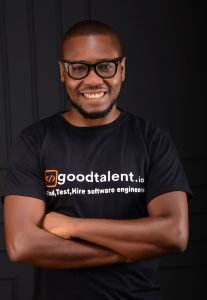 After 6 years as a general recruitment consultancy, he saw an opportunity to provide a bespoke service for IT recruitment.

As they began their market research, Jimmy and his team kept finding tech startups that were struggling to recruit the right talent. Rather than forming a traditional recruitment agency, they created GoodTalent as a platform that gives the companies control over the whole recruitment cycle, as well as the tools to approach candidates directly and at a fraction of the cost.

GoodTalent.io launched in April last year, and within 6 weeks they had over 700 software engineers signed up. The site works like an ordinary applicant tracking system, except that companies have access to the whole pool of applicants and directly approach people whose skills match their needs, as well as post open job adverts.

GoodTalent have also adapted their system as much as possible to the flexible job market in the IT industry, where businesses often only need someone on a short term contract for a specific task. Candidates can create a profile on GoodTalent including their availability for work, which speeds up recruitment for small contractual jobs in particular, as well as for permanent employment.

As well as their flagship GoodTalent.io software development tool, GoodTalent are developing a suite of programmes for the whole IT recruitment process, including a Wallet system to pay international freelancers in local currency, a Marketplace platform for other IT roles like software testers, human translators, or digital marketers.

After five months of trading, GoodTalent were looking to improve their international connections and build a reputation in Europe and saw the UK as the best place to startup as a tech company.

As Jimmy began looking for places in the UK to start his business, it was essential to find somewhere with both a lively tech startup community and an ideal location to raise a young family. It became clear that Swindon and Wiltshire offered both of these in abundance, while also remaining more affordable than other well-connected areas.

“Swindon is a hub for startup tech companies, and there’s easy access to cities like Bristol, Bath, London, Oxford, Reading and Cheltenham. I was introduced to Andrew Wells from Swindon Borough Council while still back in Nigeria, and he has been amazing. I’ve been introduced to a huge range of people to help build my network locally, including at the new Institute for Technology who are currently helping us recruit an apprentice, who will start with us in May.”

“We’re starting to build the pipeline, and have just moved into our new offices in the city centre. We have already begun trading with European companies who are looking for developers to work remotely, but who feel more comfortable working with a UK-based entity. Using our systems they can employ contractors based around Africa, and pay them in local currency, but always do business with GoodTalent in the UK.”

“Being in Swindon broadens our opportunities globally. We have the confidence to speak to any company anywhere in the world.”

With support from the broader tech community in Swindon and Wiltshire, as well as the council, GoodTalent are accelerating their business, with three new releases planned in the next 10 weeks.

Find out more about GoodTalent and their suite of innovative products and services at gtco.net/

Read more about the ‘soft landing’ available to inbound companies in
Swindon and Wiltshire.

This website uses cookies to improve your experience while you navigate through the website. Out of these, the cookies that are categorized as necessary are stored on your browser as they are essential for the working of basic functionalities of the website. We also use third-party cookies that help us analyze and understand how you use this website. These cookies will be stored in your browser only with your consent. You also have the option to opt-out of these cookies. But opting out of some of these cookies may affect your browsing experience.
Necessary Always Enabled

Any cookies that may not be particularly necessary for the website to function and is used specifically to collect user personal data via analytics, ads, other embedded contents are termed as non-necessary cookies. It is mandatory to procure user consent prior to running these cookies on your website.

SAVE & ACCEPT
Go to Top